We had another lovely Sunday here in Mbale.  We had three professions of faith and one baptism.  First, Naomi, daughter of Pastor Charles professed her faith, followed by our South Korean friends, Kim and Jina.  Kim and Jina are living and working in Mbale for two years.  He is an Ear, Nose, Throat doctor at Mbale Main Hospital. 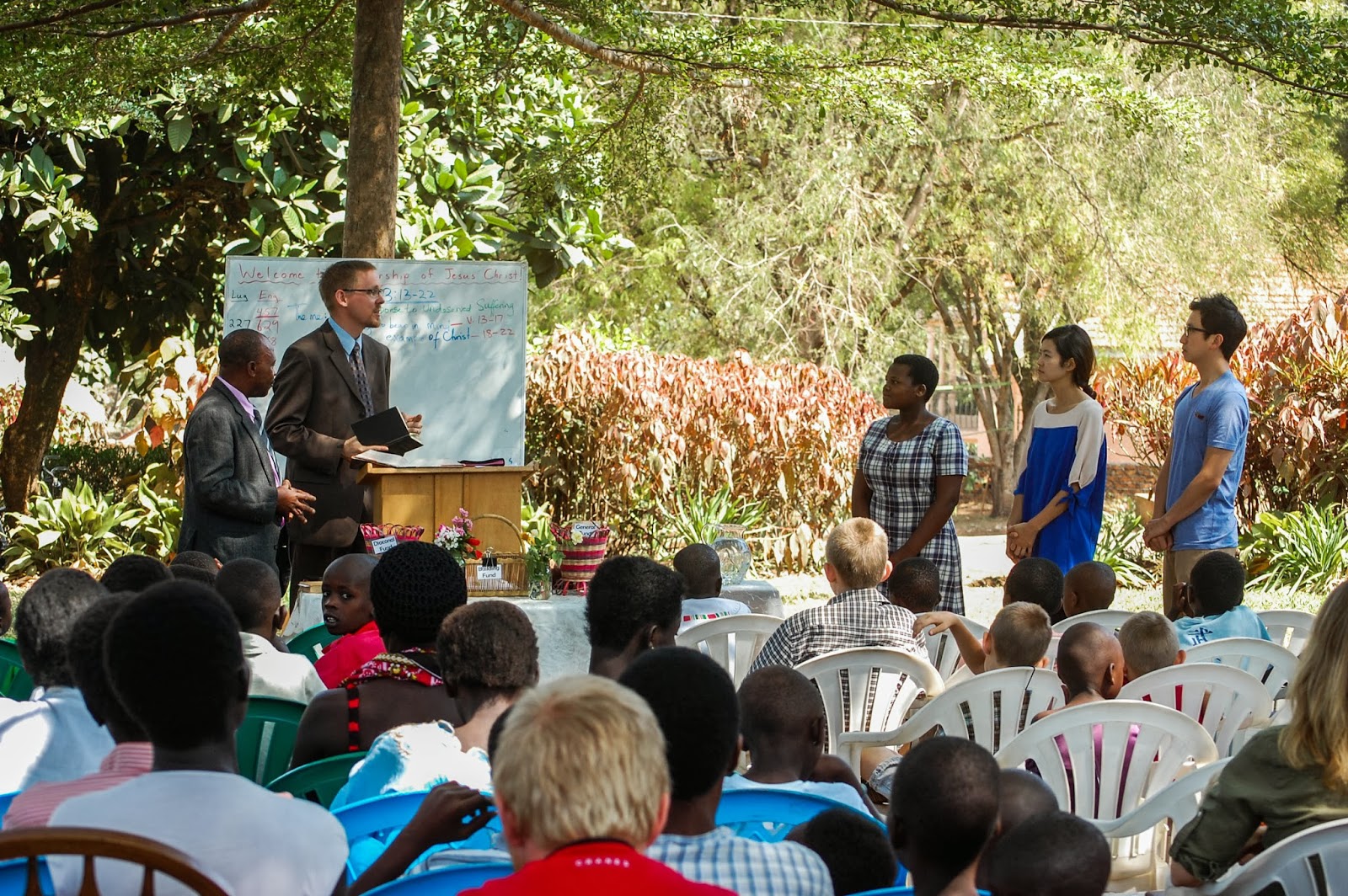 As the offering was being collected later in the service we sang,

For his the kingdom, his of right,
He rules the nations by his might;
All earth to him her homage brings,
The Lord of lords, the King of kings.

Both rich and poor, both bond and free,
Shall worship him on bended knee,
And children's children shall proclaim
The glorious honor of his Name.

All earth to him her homage brings,


The Lord of lords, the King of kings.

And I thought, how fitting...so many peoples of the earth...many nations, many generations, many people walking many different paths...all coming together to celebrate the King of Kings.  It is truly a beautiful thing and we are so thankful to be a part of it. 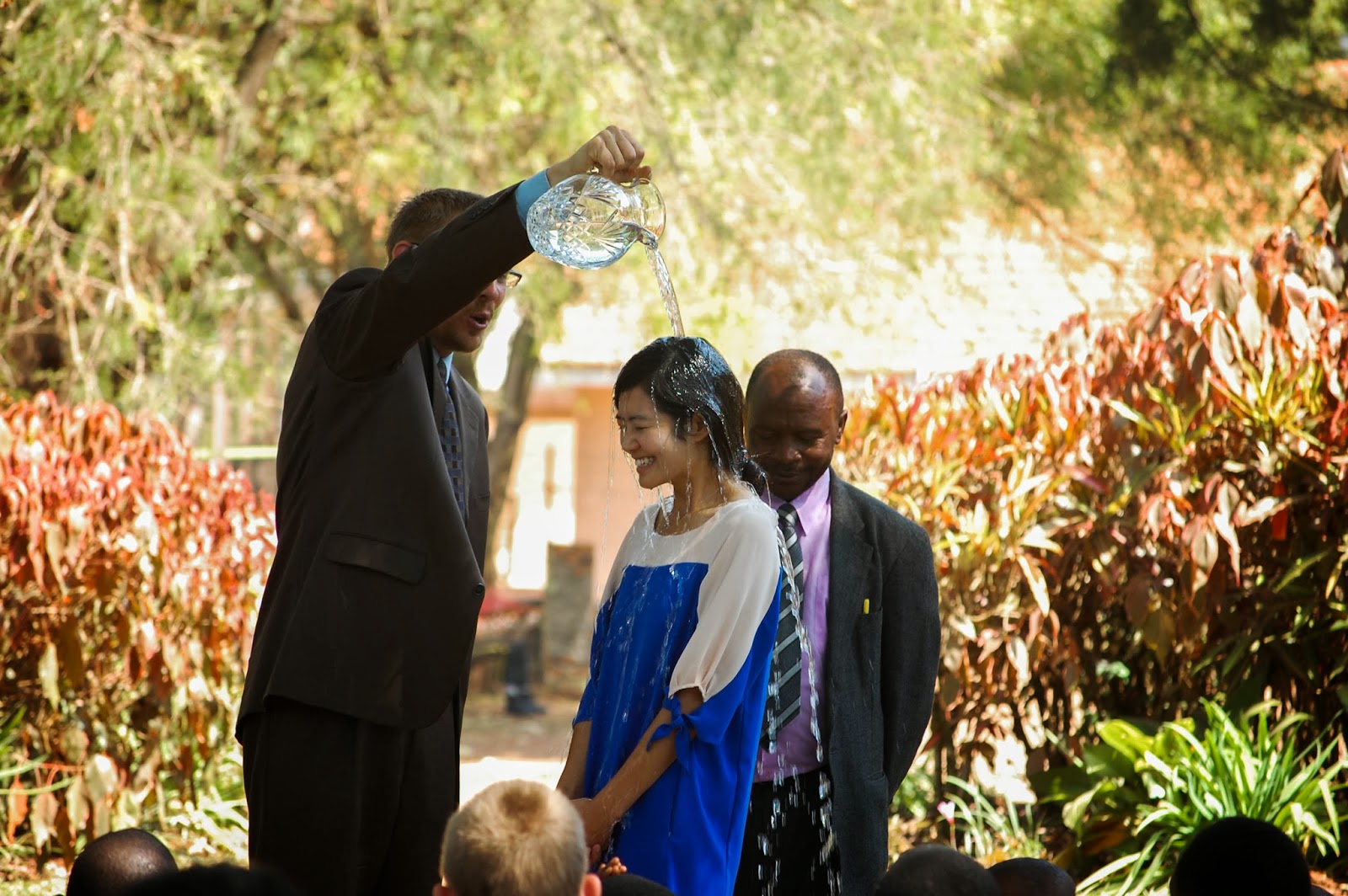 Posted by dkt at 12:21 PM No comments:
Email ThisBlogThis!Share to TwitterShare to FacebookShare to Pinterest
Labels: Orthodox Presbyterian Church of Uganda

There are many kids who come to church and to our Sunday Evening festivities without parents.  Eric and I have been making attempts to visit their homes, meet their parents and encourage their parents to come.  On Monday we went to the area of town known as Mooni to find them.

Their homes continue to humble us... 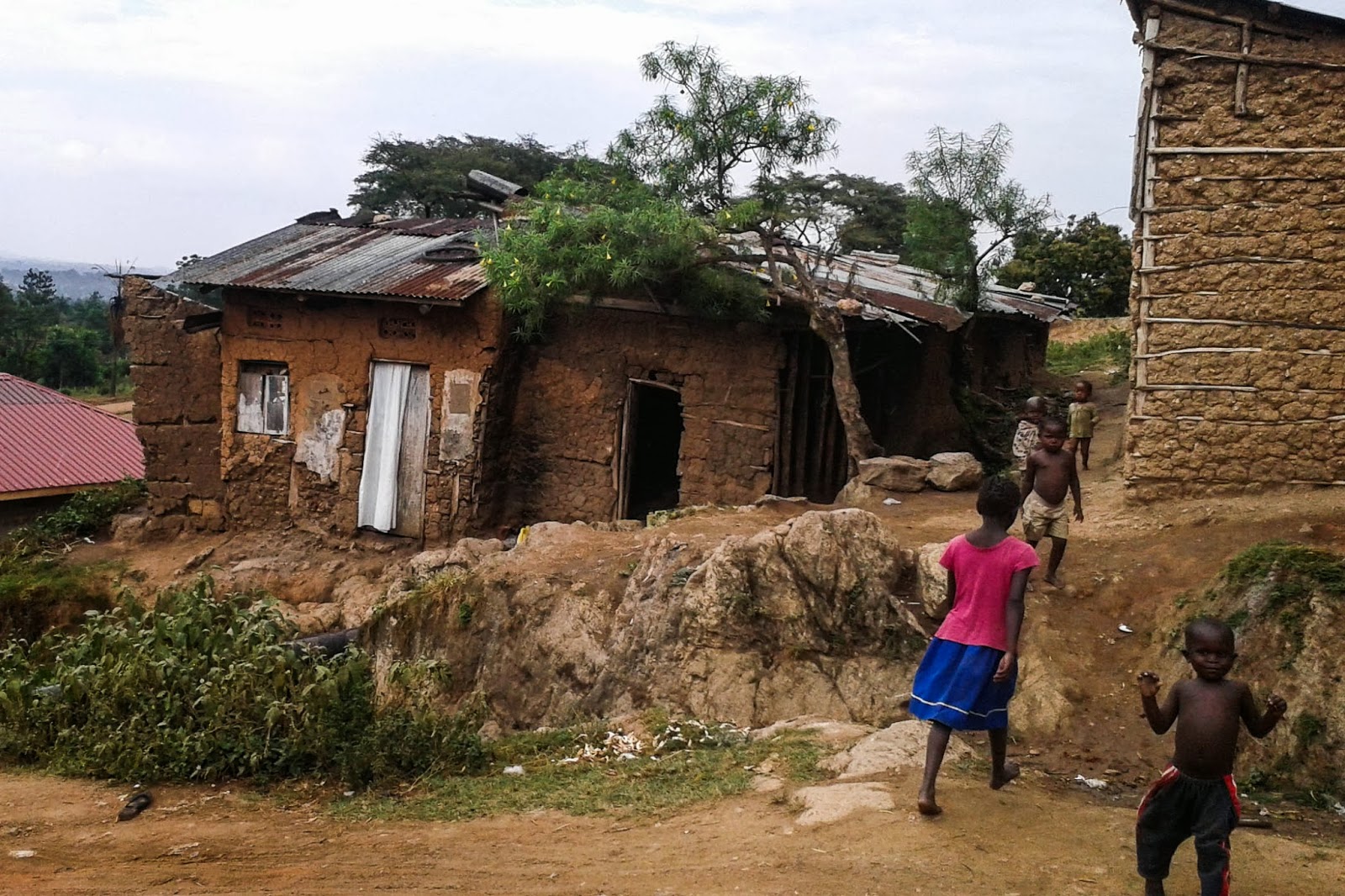 This is Fred standing outside his house. 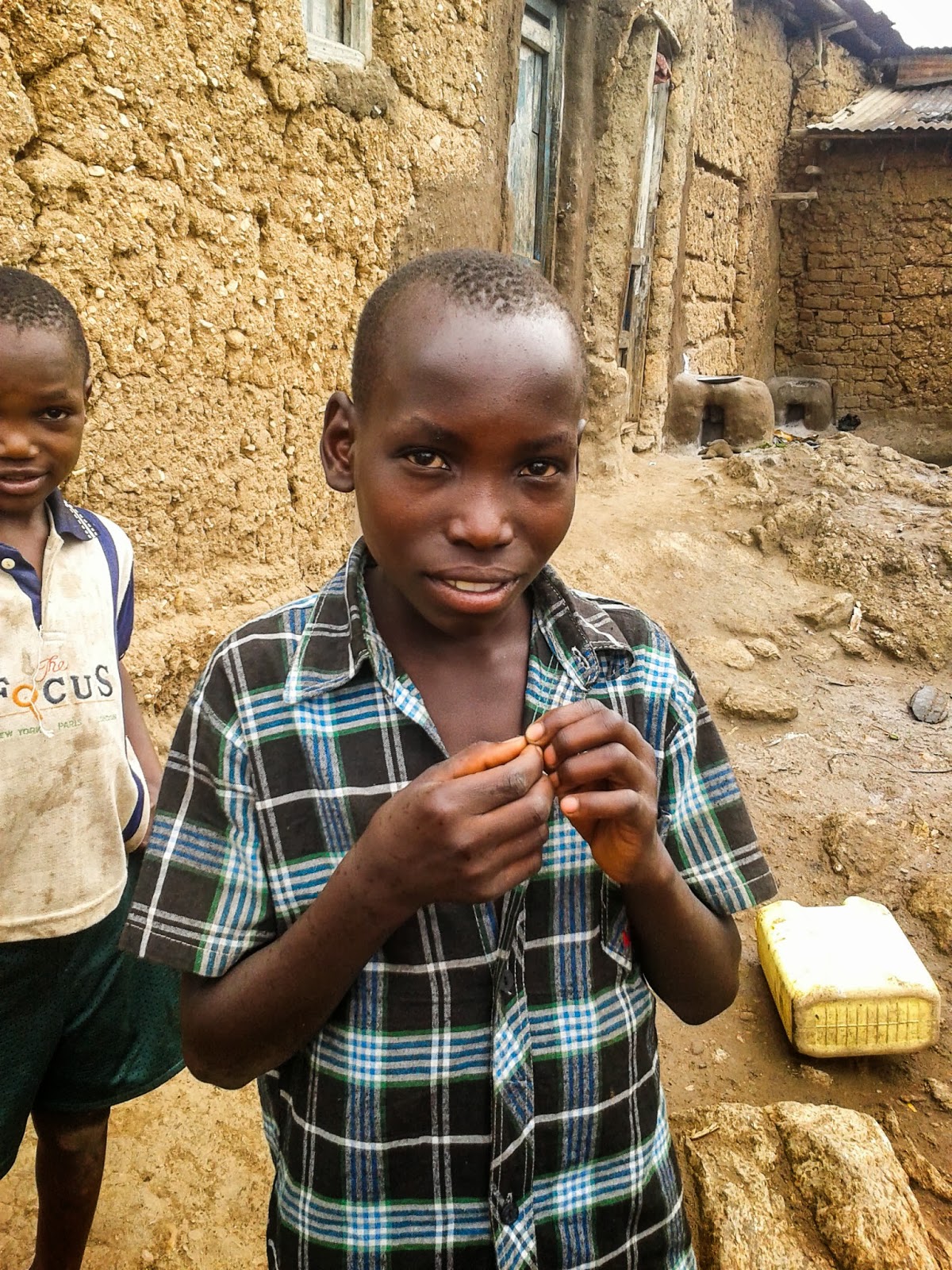 While we were there, we collected quite the crowd of kids, so Eric launched into a short talk about the Gospel.  Two of our boys...Ivan and Max...translated for him.  It became a new lesson for the little kids and a good time of mentoring for the man-cubs. 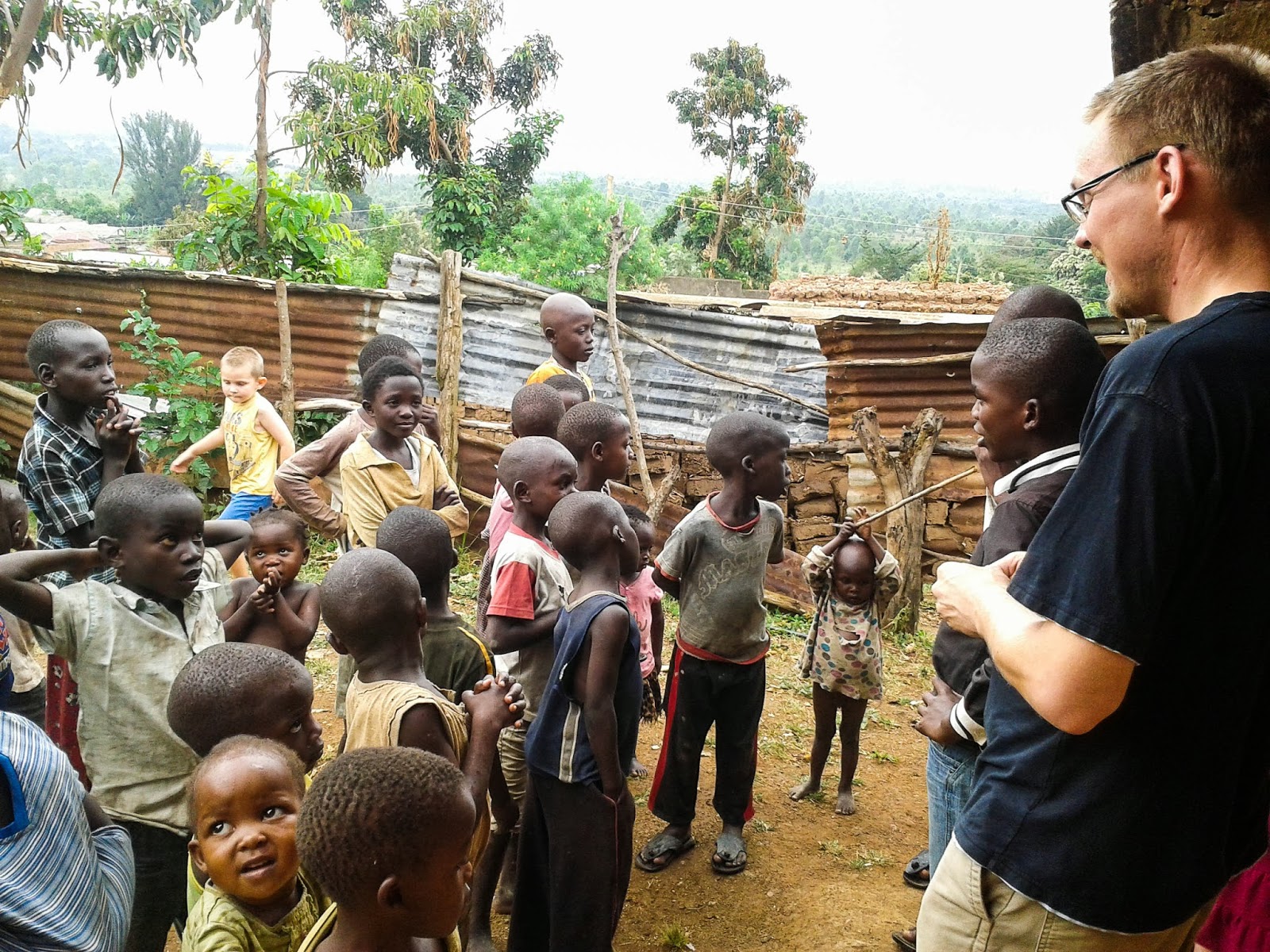 I had the privileged to attend the court case for the adoption of little H into her family.  It was a time to testify and Lord willing, make formal, the relationship that already exists.  We continue to pray for a positive ruling at the end of February (and for patience for dad and mom while they wait!) 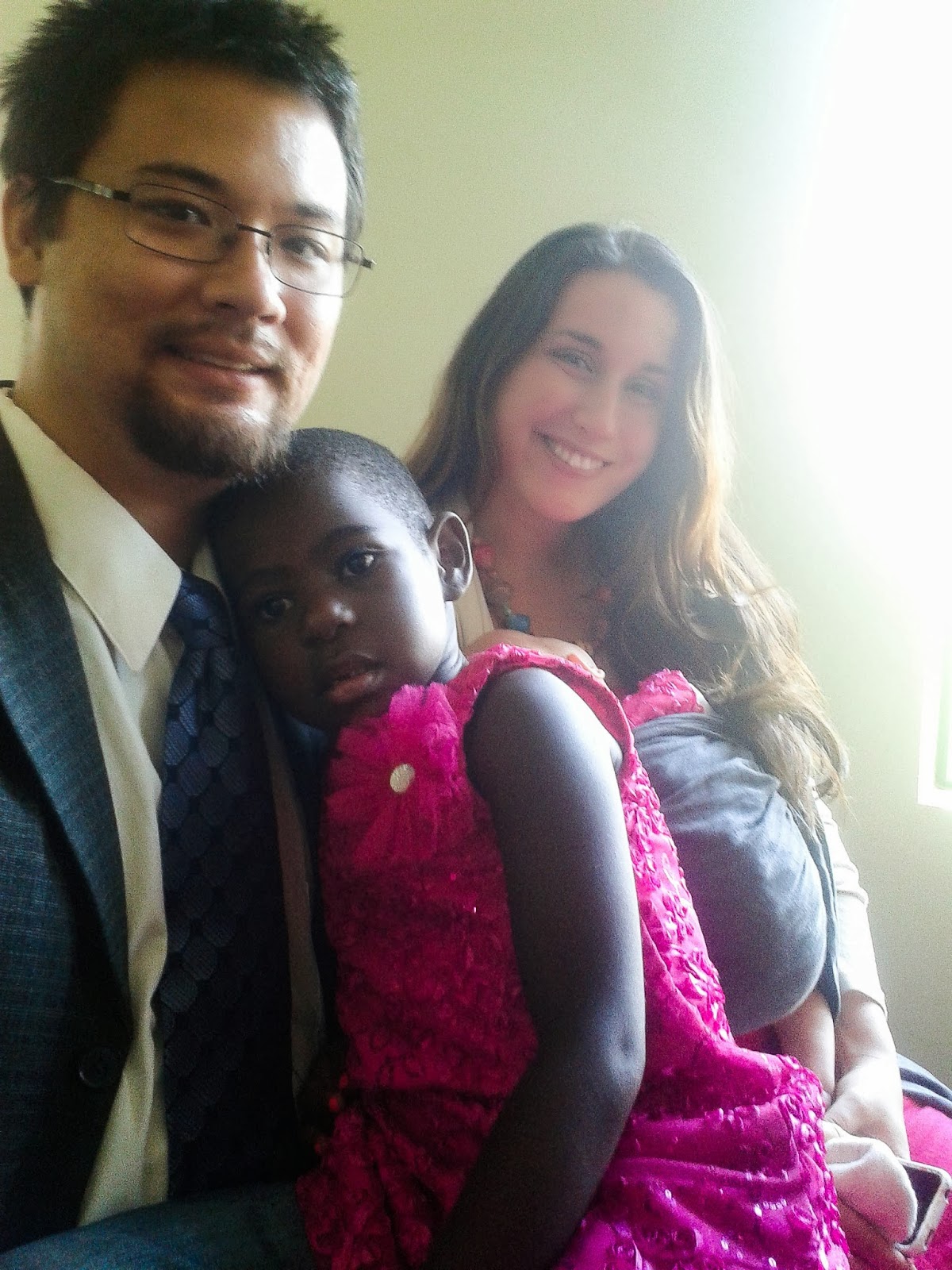 William got his cast off!  He's now sporting a cool brace and we are still trying to scrub off all the dirt that made its way under his cast and is now embedded in his arm. 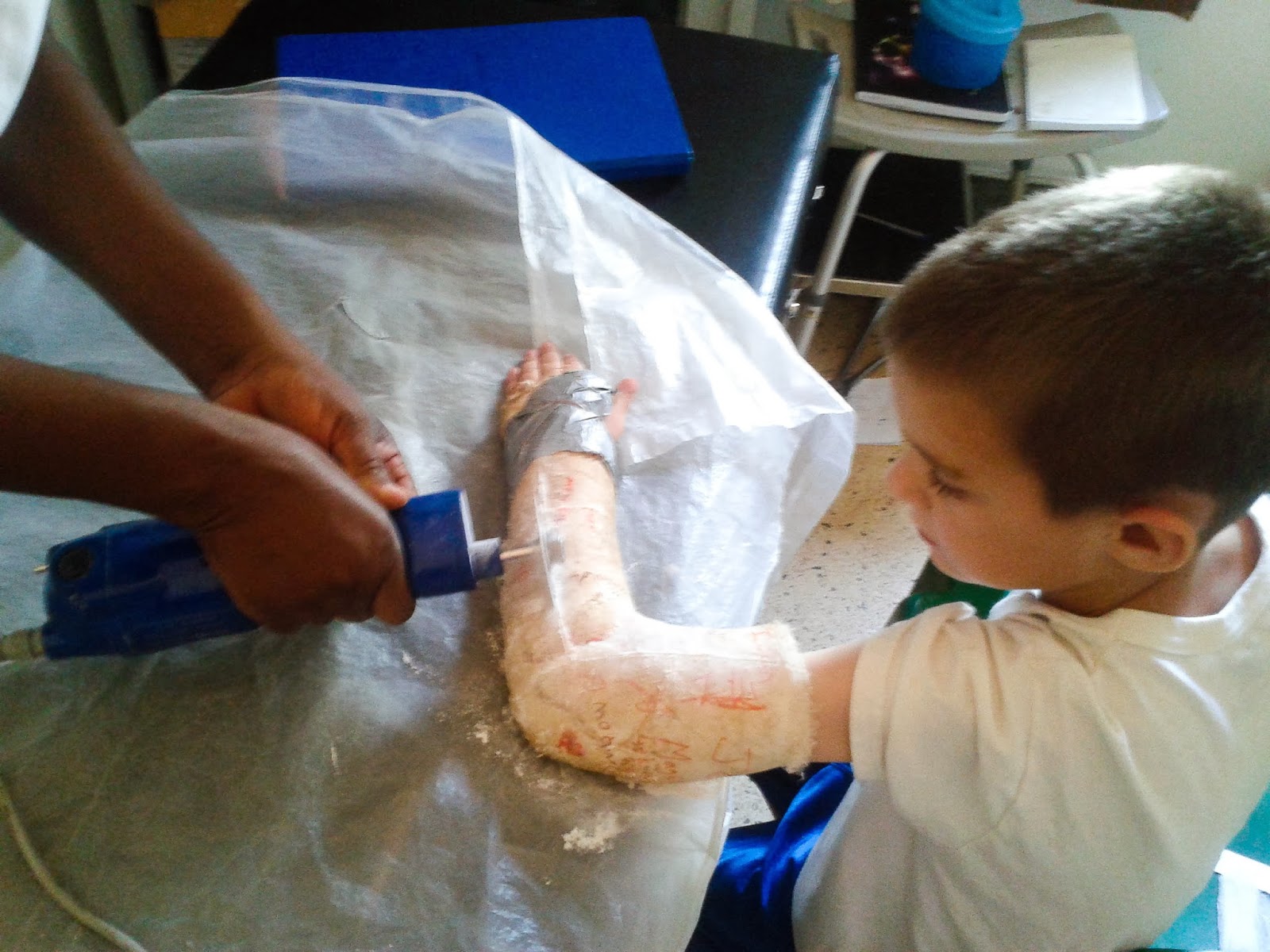 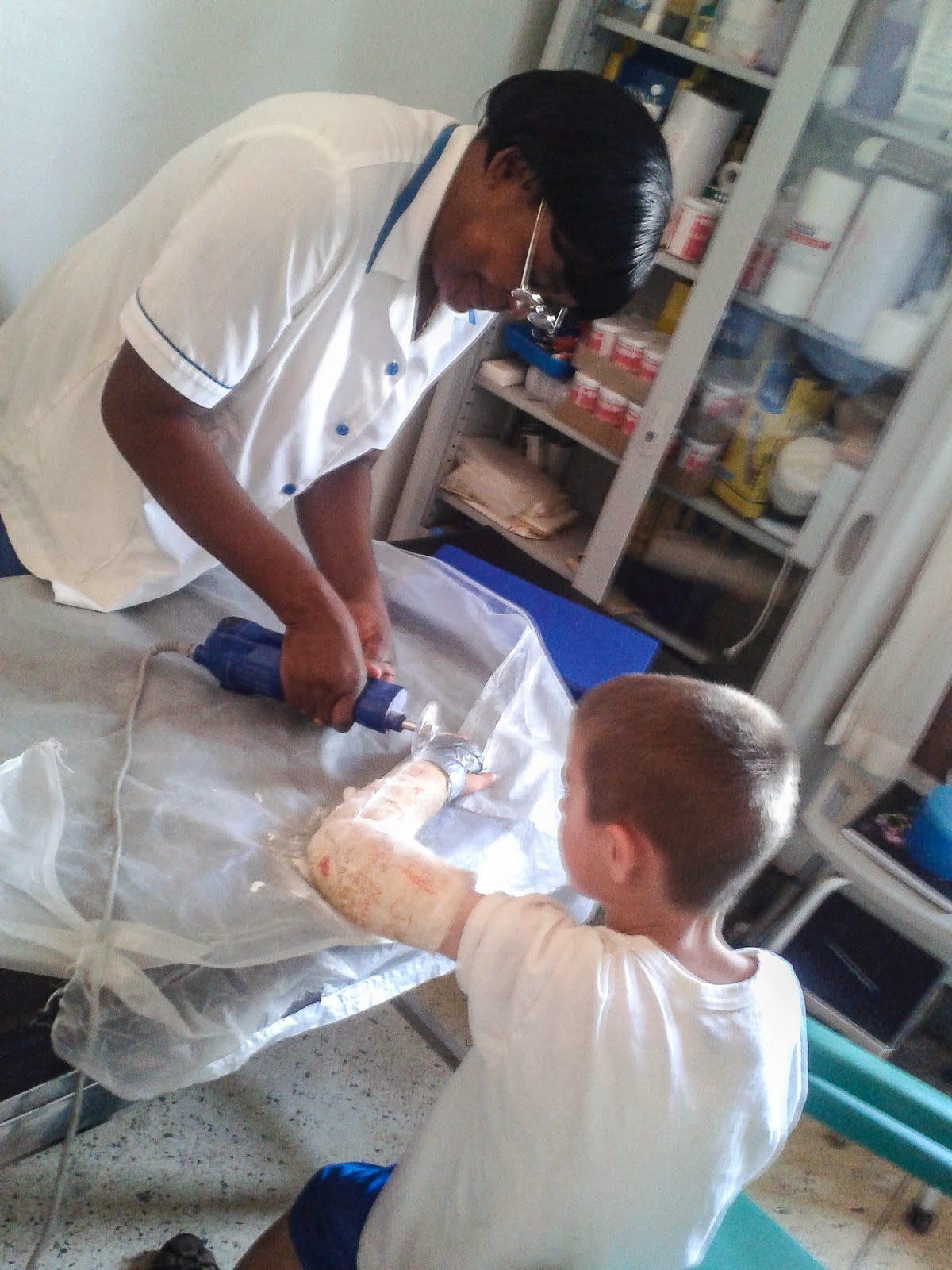 Last week when we went to pick up Emily, our new helper, from the airport, our car was broken into.  We had three bags taken.  Two of them were ours.  We lost our bibles, journals and some clothes.  One was Emily's, which contained almost all of the things she brought for her 3 months here!  It also contained her retainers.  So she and I went back to Kampala to get new ones made for her...and do a little more shopping... We stayed the night in a cheaper hotel and decided that if we ever stayed there again, we would bring earplugs to drown out the traffic and shouting...and a fan...and a generator to power said fan and so the people can cook breakfast for us, instead of insisting it would only be a few moments despite the fact that they were sound asleep on couches in the dark room and then scolding us when we went to Cafe' Java across the street...
Posted by dkt at 7:12 AM No comments:
Email ThisBlogThis!Share to TwitterShare to FacebookShare to Pinterest
Labels: everyday life, family ministry, Life in Uganda

In Which William Makes Great Use of His Cast...

William discovered that his hard cast was good for cutting carrots.  When it got too hard to push the knife through the thick carrot, he slammed his cast down like a hammer.  Only two more days of life-in-a-cast for him!  He has been such a trooper through it all...he has never once complained! And yes, that is duct tape holding his cast together...plaster casts have a hard time surviving 4 weeks on a 6 year old boy.  Love this kid! 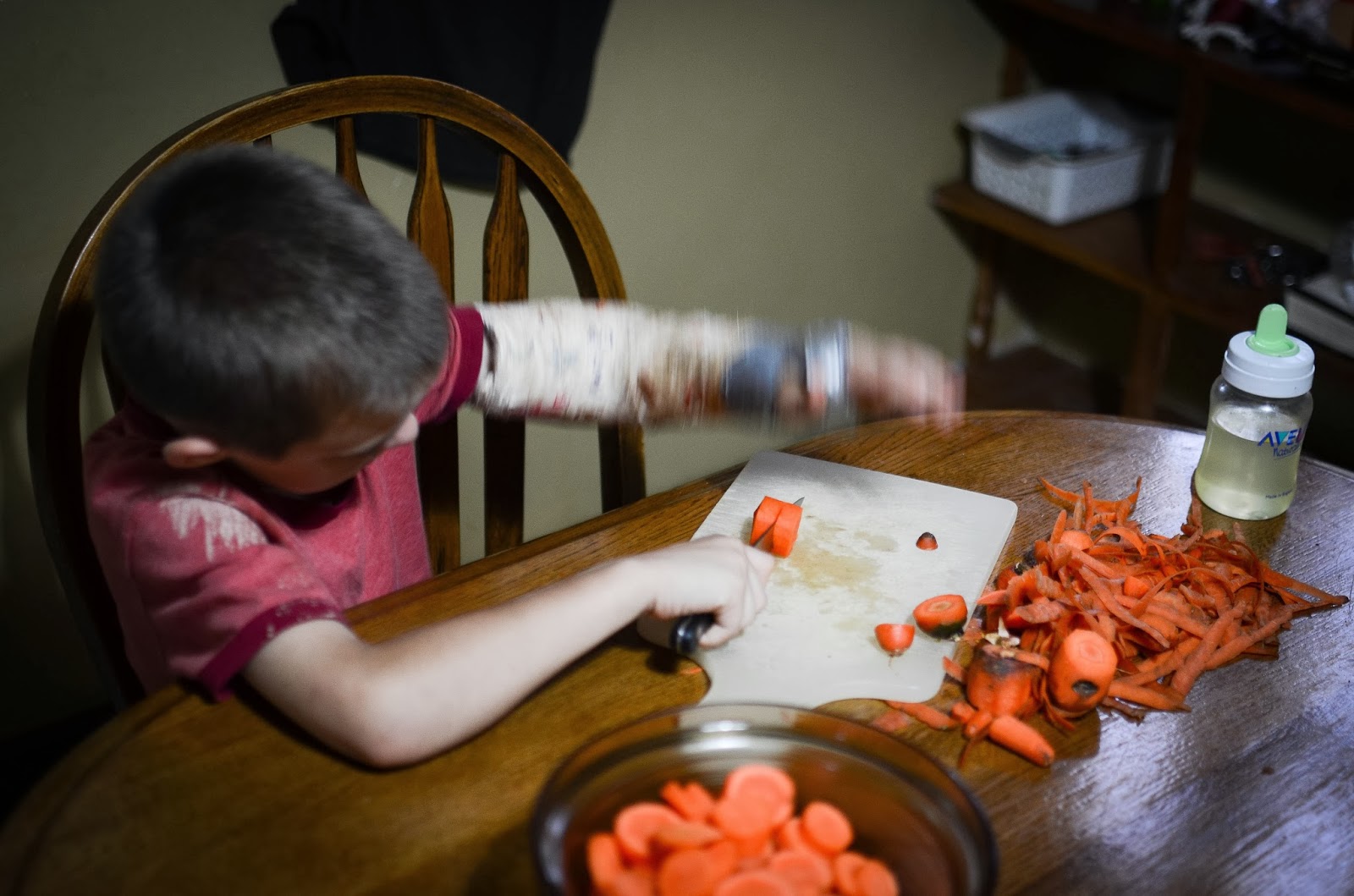 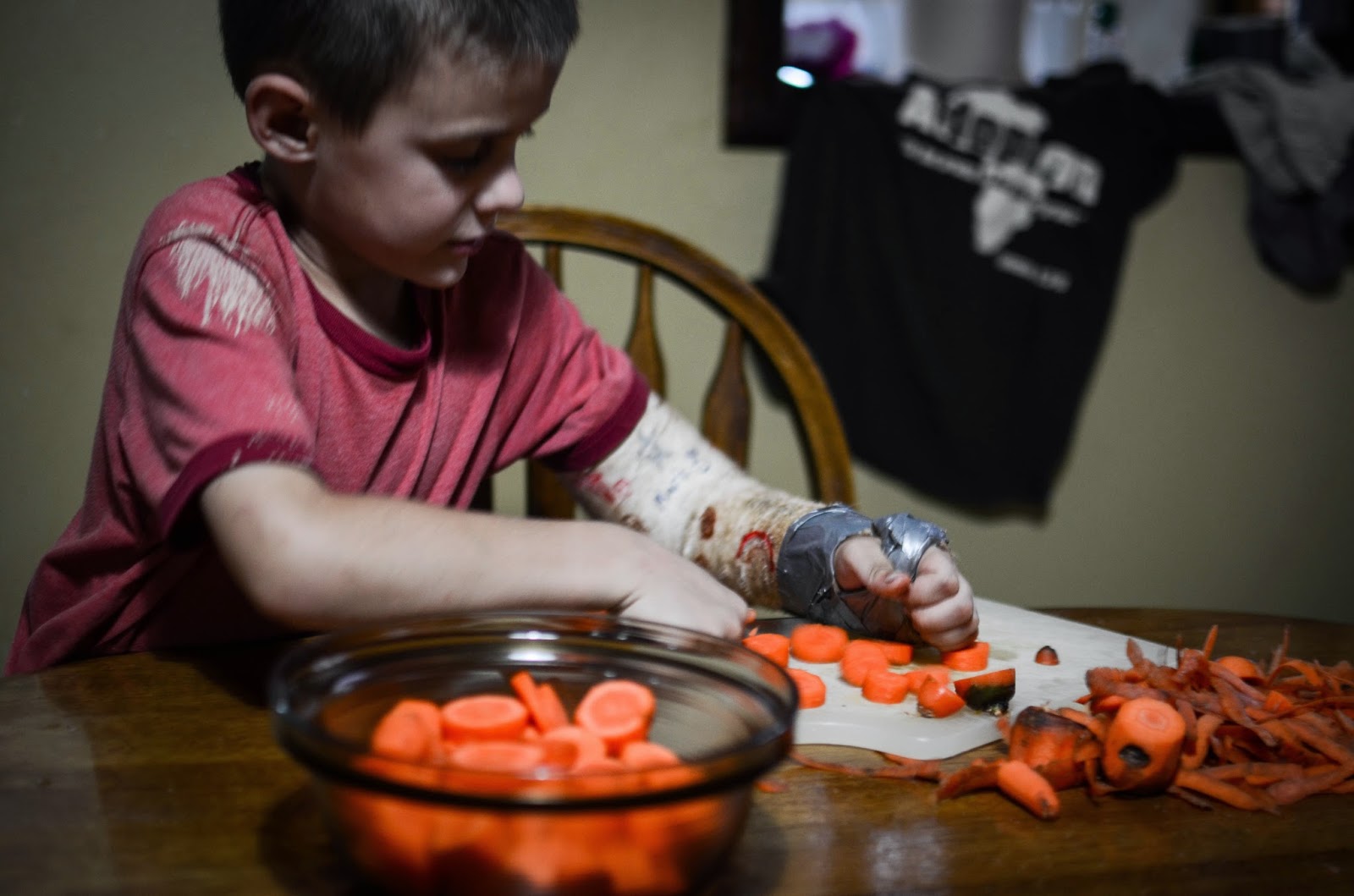 Wow...have I really gone 2 whole weeks into January without posting?  Oops!  We've been super busy these days enjoying our extended Christmas break.  The Ugandan schools have their long break (their "summer vacation") right now.  They will begin a new school year in February.  Our little friends love to come here and play and visit with our family, so the Tuininga compound has reached new levels of joyful chaos in the past month.  Because of that and because we are anxiously awaiting our new helper's arrival tomorrow night, we have postponed starting school for a bit longer than normal.

So here are a couple highlights from the past couple weeks:

::We found a yucky-big snake in the outside part of the shower drain of our guest bathroom.  Sorry to all past and future guests.  (No worries though, we are working to cover the drain, so please do come visit. :) ) Rebecca was taking a shower at the time, and Benaiah was outside walking around when he spotted it.  He did the right thing and immediately told an adult.  The snake crawled into the drain towards Rebecca (who was blissfully ignorant of the events of the moment, and later found the whole thing quite humorous) but eventually, the guys were able to pour petrol down the drain and chase it out and kill it. 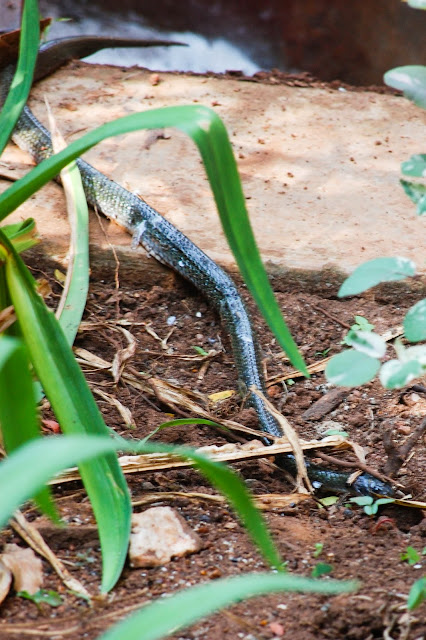 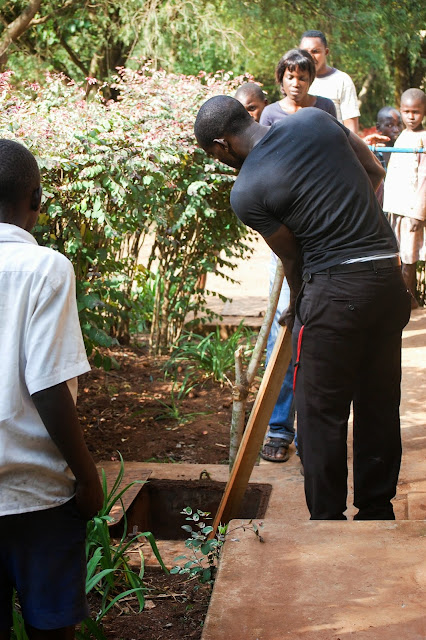 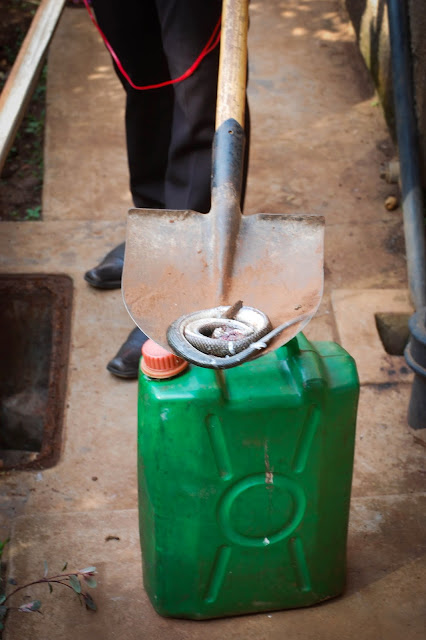 ::I had two goals for Talitha over Christmas break... #1: to potty train her;  #2 to get rid of her pacifiers.  The first was an epic fail.  I'll have to maintain my habit of holding off on potty training until closer to age three.  But what's a few more months after almost 13 years?  However, she was able to be bribed "given a gift of appreciation" for (as the Ugandan police say) throwing away her beloved pacifiers...or as she called it, her "si-si".  She got a book and a aqua colored, sparkle covered tu-tu.  Now she has officially become a night-time motor mouth...she talks (and sings!) non-stop in bed while she's trying to fall asleep! 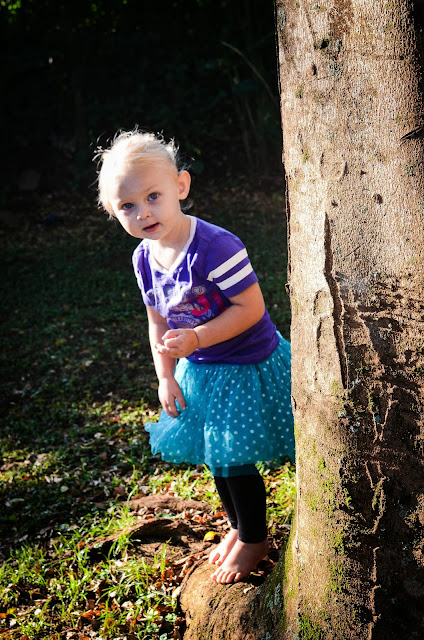 I gave Katelyn the camera for this one and I thought it turned out so sweet.  :) 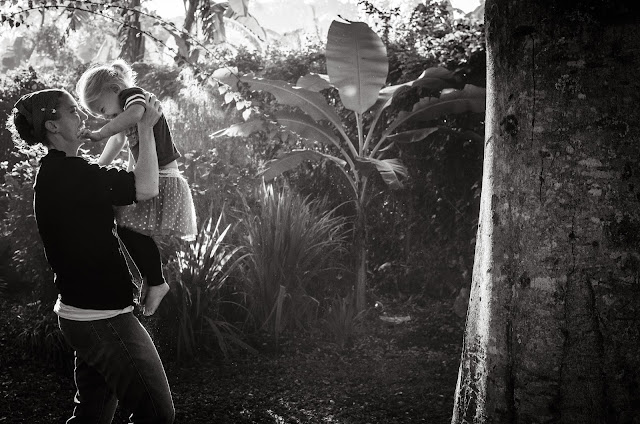 ::A church in America sent a lovely care package for us.  Inside it was two crafts that our kids could do with the kids that come over to play on Sunday afternoons.  Katelyn loves to take charge of these kinds of things and organize. 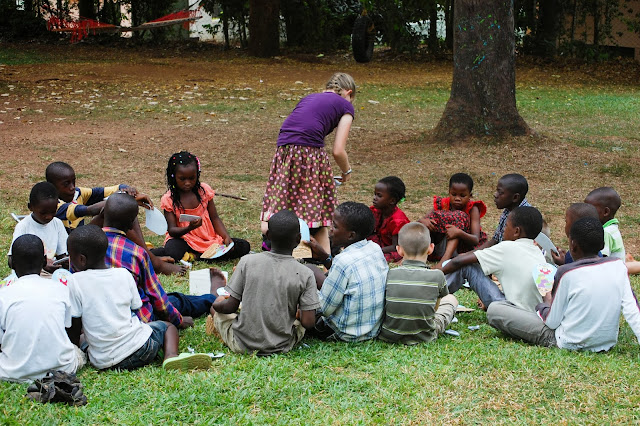 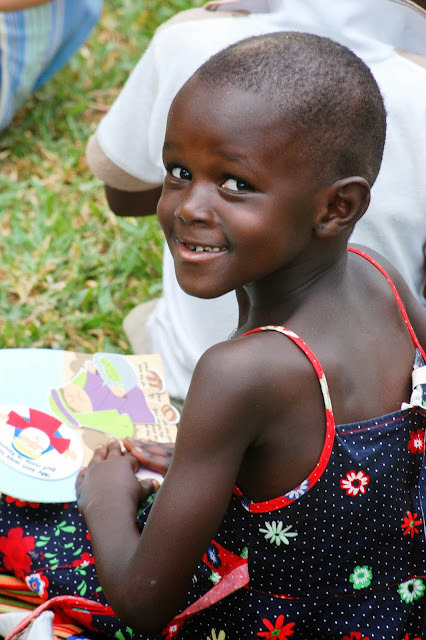 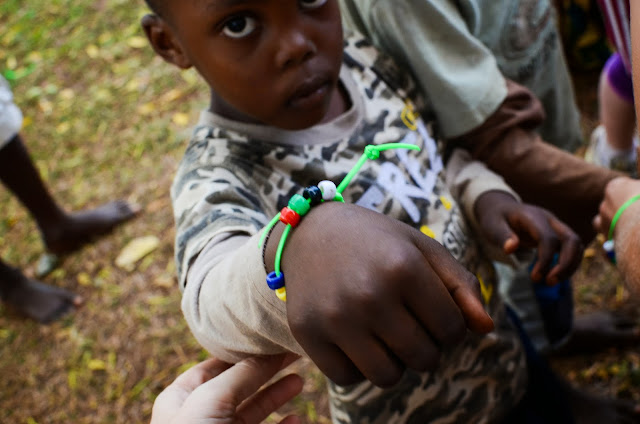 :: We spent last Sunday at a village church.  Talitha chose this little one to be her friend for the day. 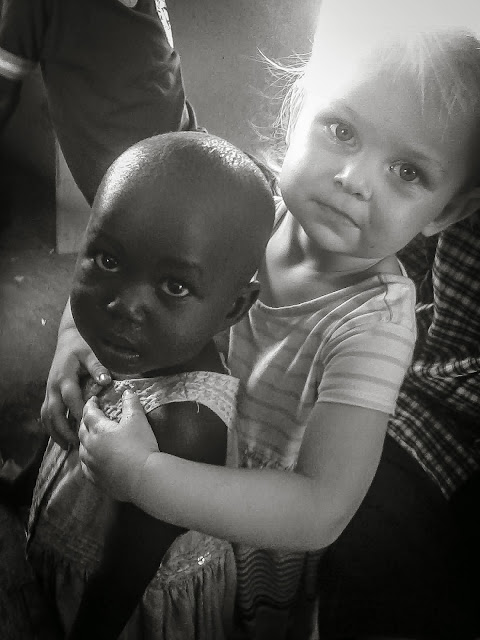 :: A few of the kids put their money together and added a few more members to the Tuininga Farm.  We now have 2 dogs, 3 cats, 3 bunnies and 5 pigeons.  Currently, they have their flight wings tied up while we coax them into staying in the yard...no small task considering they are at the bottom of the food chain.  Every morning has become an exercise in separating all members of the food chain so that they can eat in private and not eat each other.  Hopefully, after a week we will be able to untie the pigeons and they will be able to escape the canine and cat teeth and still stick around our compound. 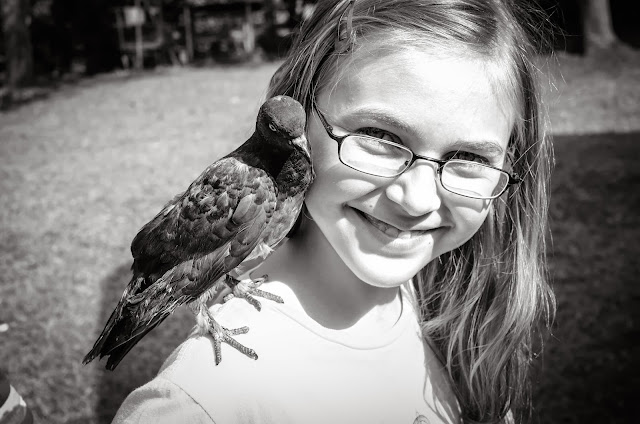 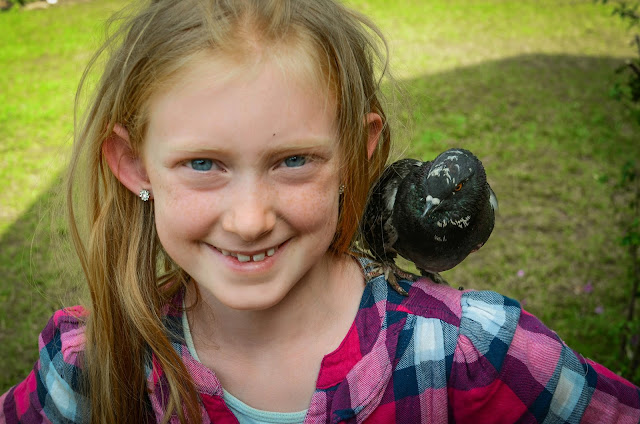 ::  Eric, Mark, Pastor Charles and a few young men, took about 12 preteen boys from our church on a camping trip at the top of Mt. Wanale.  They ate 8 packages of hotdogs at night and 120 pancakes that I had premade for them for breakfast.  From all reports, they had a blast...and nobody died...which was a huge answer to prayer considering the sketchy hike they went on in the morning.  And of course just before they got all packed up to come home, it poured rain.  When they got back to our compound, all of the tents had to be set up and I won't begin to say how much laundry we had! 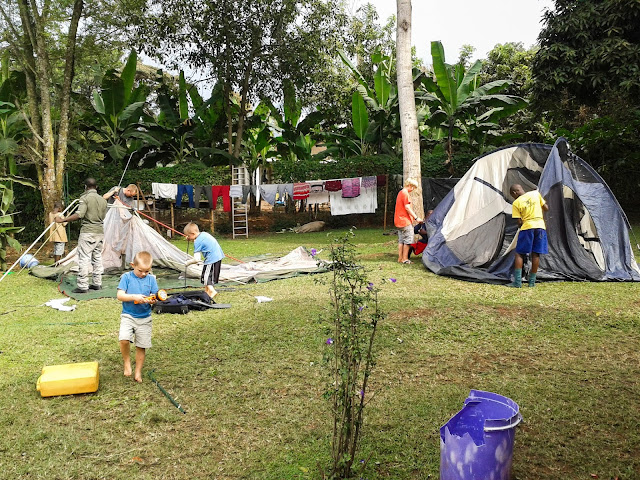 Well, that's all for now.  Hopefully it won't be too long before you hear from me again!  :)
Posted by dkt at 2:26 AM No comments:
Email ThisBlogThis!Share to TwitterShare to FacebookShare to Pinterest
Labels: everyday life, Life in Uganda, Orthodox Presbyterian Church of Uganda, Tuininga Farm
Newer Posts Older Posts Home
Subscribe to: Posts (Atom)