So I was innocently taking a nap today and then the kids began knocking quietly at the door.  I tried to ignore them.  Finally, I asked who was there...then there was a chorus of voices:

ugh... nap time is finished for the day.

So we were back at it for the third time this week. 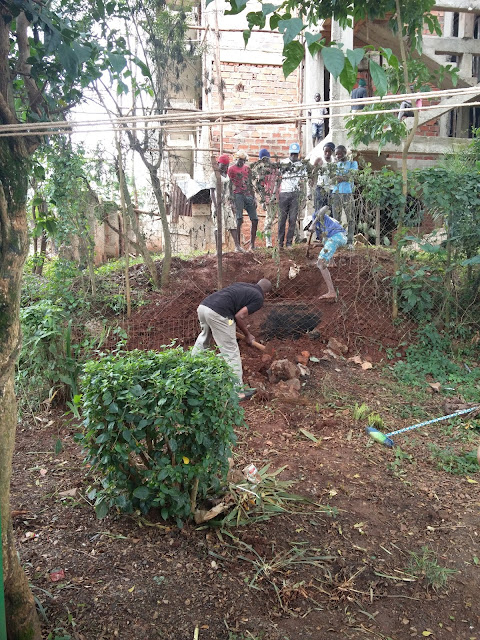 Pulling the cobra out of the hole: 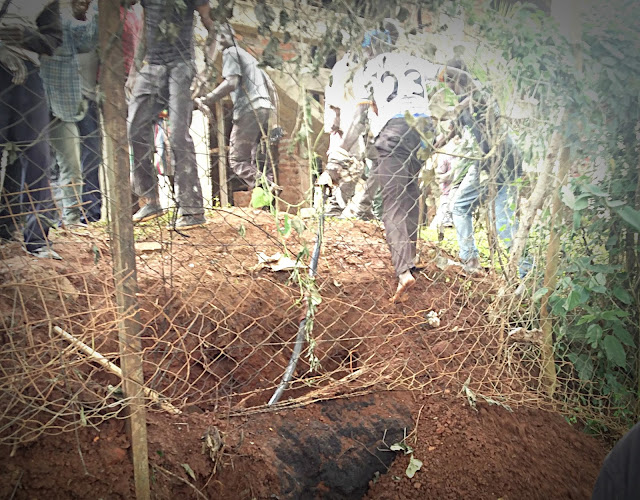 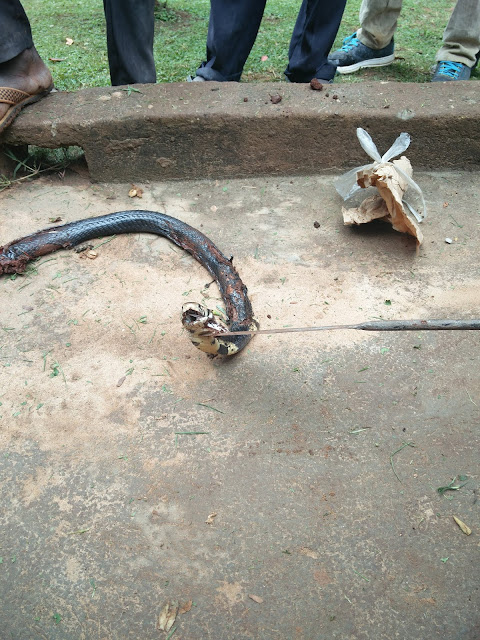 Then they chopped off the head for us: (The head gets buried so no one gets hurt) 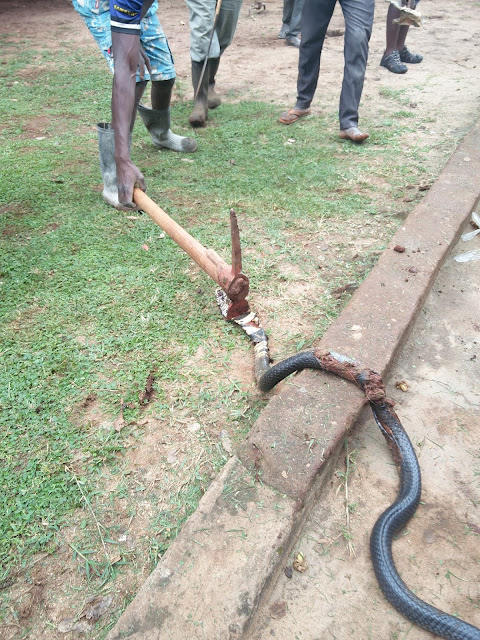 Here are the workers from next door that killed it.  So thankful! 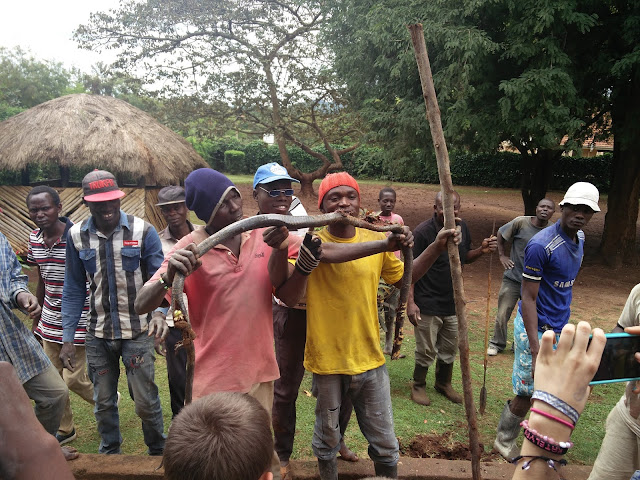 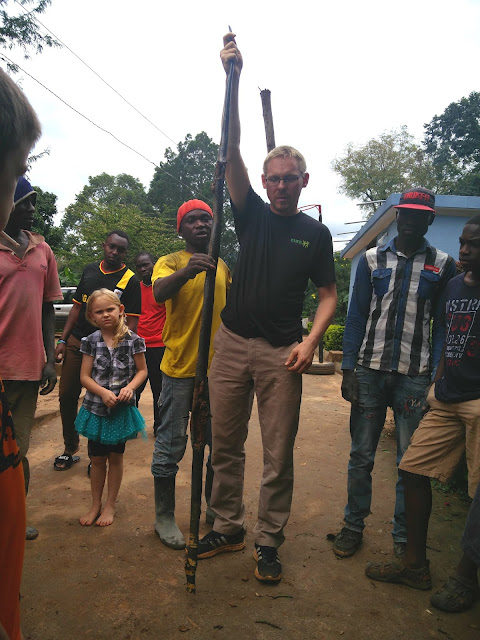 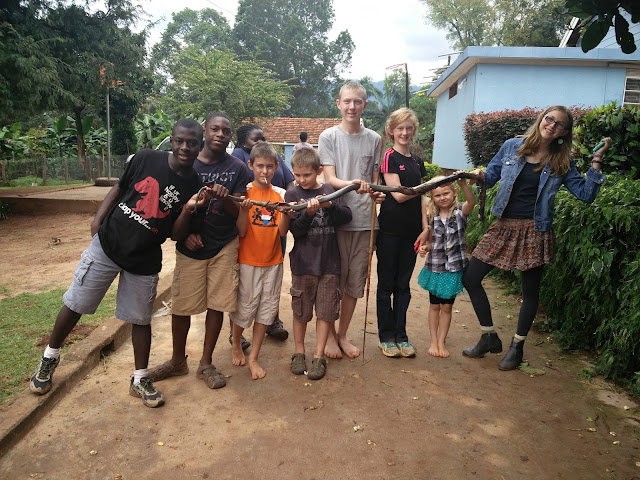 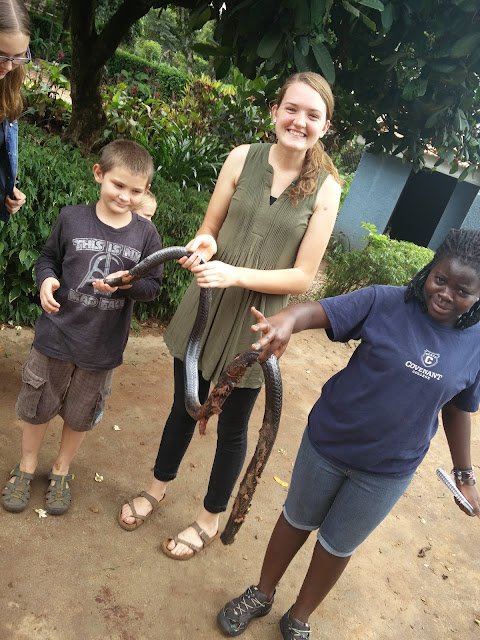 Yes, I have no words... my kids had at it. (pictures courtesy of Paige) 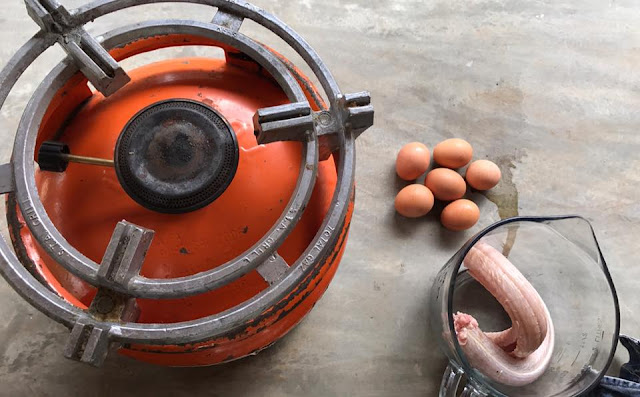 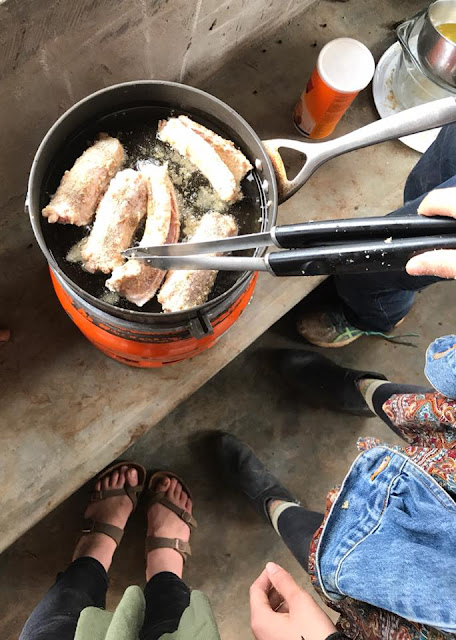 Posted by dkt at 7:25 AM 1 comment:
Email ThisBlogThis!Share to TwitterShare to FacebookShare to Pinterest
Labels: Fun Family Times, it's a happy state of chaos, Life in Uganda, Tuininga Farm

Life continues to breeze by at a crazy pace, but we've had some excitement here on our compound.

:: The first is that we had a pavilion built.  It sits just outside our kitchen door.  We had long outgrown our dining room and dining room table.  Even on the rare occasion that it was just our family, we still sat elbow to elbow.  Most nights, however, we would just spill out into the living room.  But we are loving this solution. Although, admittedly, it's taken some convincing to get the kids to spread out around the table.  They have complained that we are too far apart now and Talitha still tries to swing her leg over my leg while we eat just like she always did inside. haha!  Sitting outside is actually so relaxing.  The mornings are so cool and refreshing!  In addition to meals, this space also offers too much for our ministry.  Timothy's robot club now meets out here.  We also are hoping to get copies of all the Ugandan school textbooks.  Uganda does something similar to common core, so there are standardized textbooks available.  Unfortunately, most students never see them.  We are excited to be able to have a space where students can study their textbooks during open compound.  The kids really enjoy just hanging out here too.  So much blessing and so much potential! 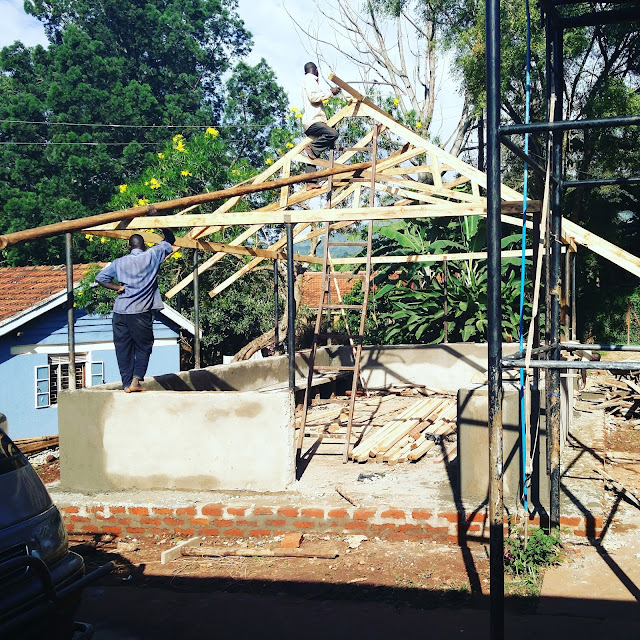 This picture is courtesy of Timothy.  :-) 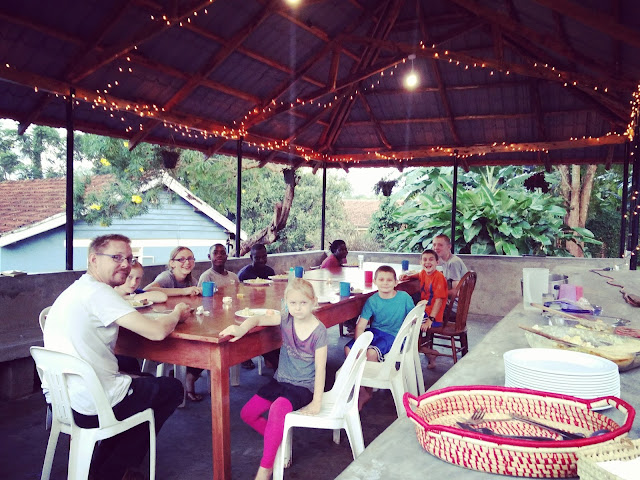 Hanging out.  We hope to get doors made soon for the areas under the counter. 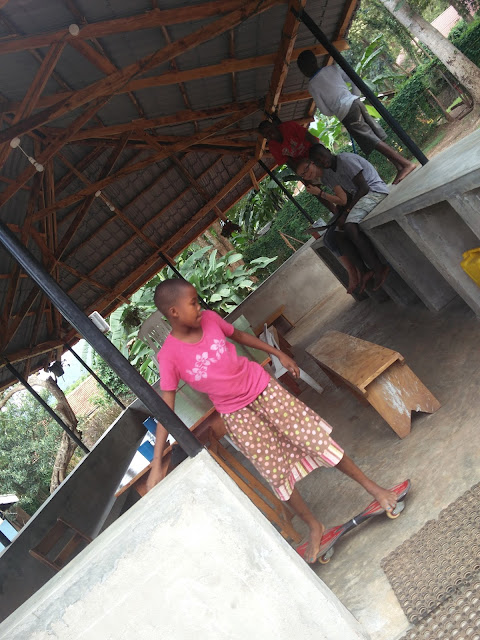 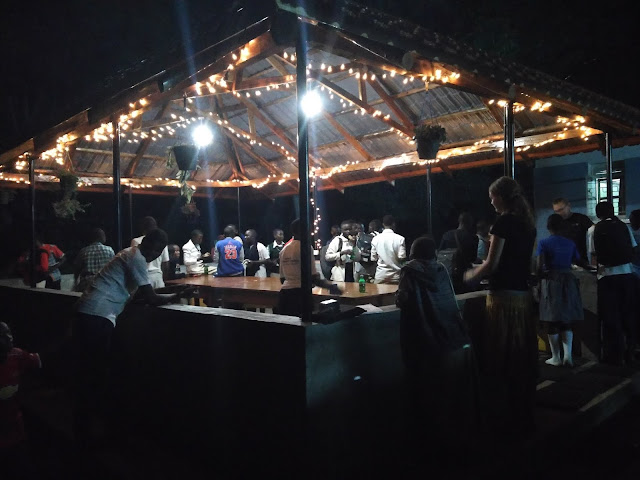 :: The second is all the drama this hole has created...actually...it's not the hole...but that the hole is home to a very huge cobra.  Denise was on the back porch (about 15 feet from this hole) when she looked up and saw the cobra start to poke his head out during a rainstorm. 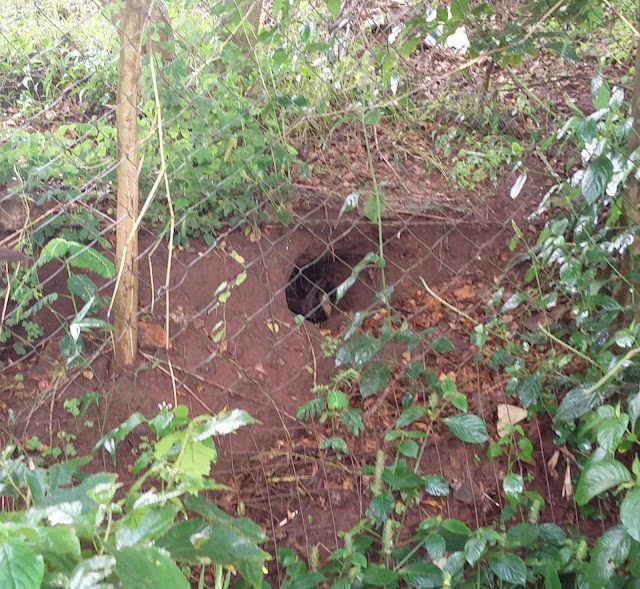 We got help from a group of men that are working on a building that is being constructed next door to us.  The hole was difficult to get to though.  It was on an embankment but on the other side of the fence from us.  They took two very long poles...one of which had a spear attached to the end of it... and tried to stab it.  The cobra came flying out of the hole with its hood out (SO BIG!) and landed in all the bushes below.  In the chaos of everyone trying to stay safe, the cobra disappeared. 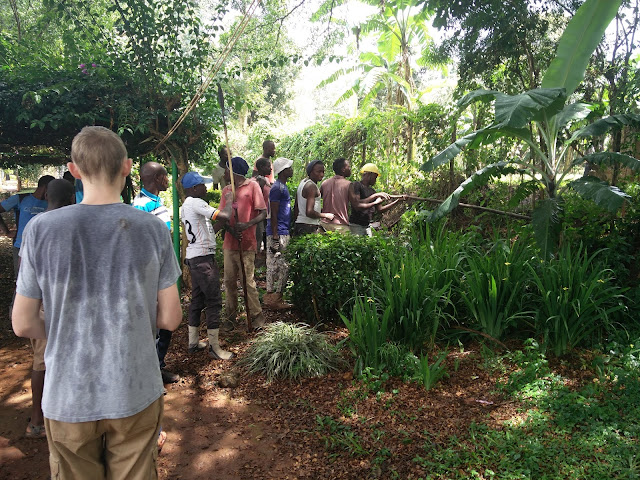 This is the building that is being constructed.  The men that didn't come over to help, gave plenty of advice while watching from a safe place. haha! 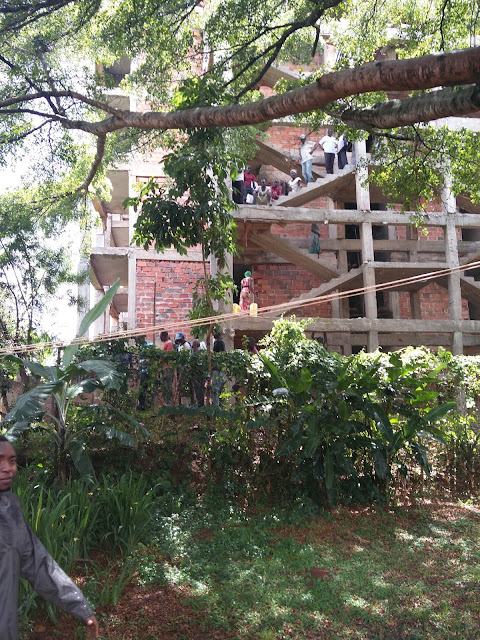 We thought that maybe it had retreated back into its hole, so we burned our tire swing to try to smoke it out.  Nope. 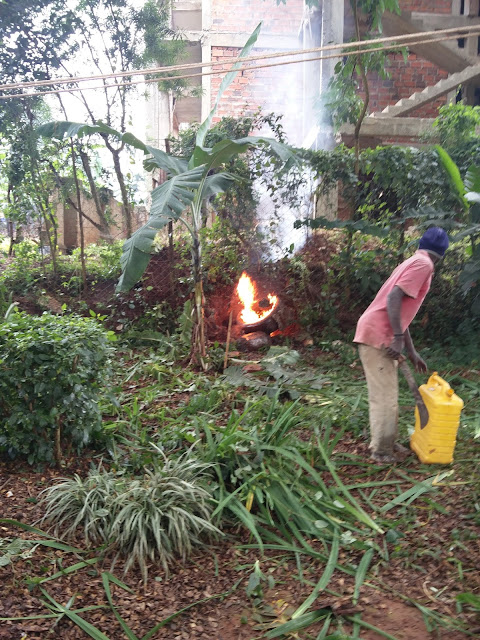 Two days later...once again...it began to poke its head out during a rainstorm.  We tried again to get it but were quite unsuccessful.  So yes...there is still a very large cobra somewhere around.  Sigh...I'll be glad when we find it! 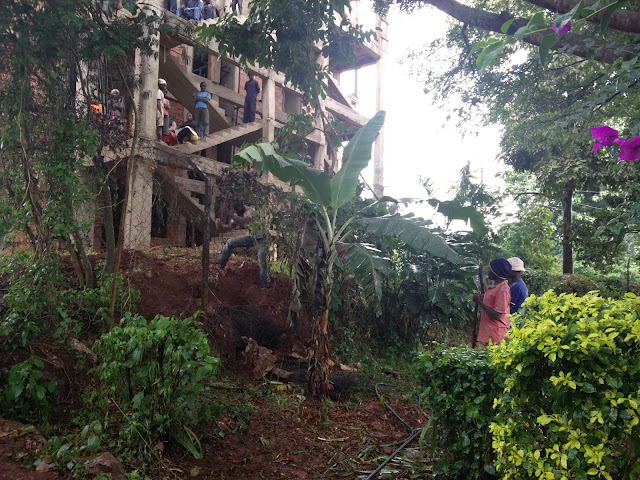 :: Katelyn enjoyed dissecting a worm for biology this past week.  We named him Fredrick. 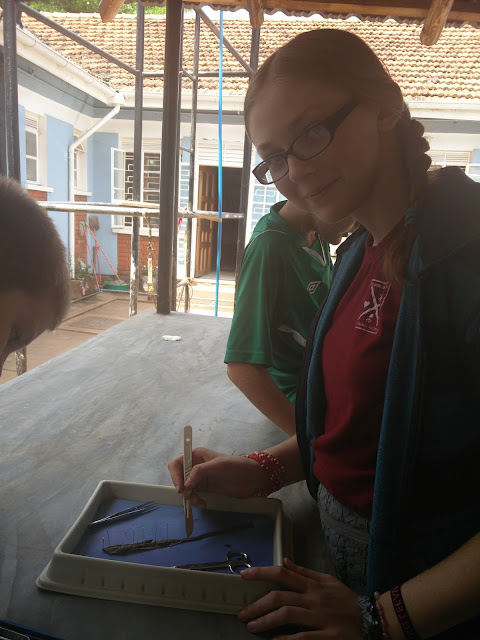 :: And Benaiah's birthday is today!  At first, he wanted an ostrich.  Then he wanted a flamingo.  Finally, he settled on a duck.  Have I mentioned we've been studying birds?  He's spent quite a lot of time pouring over the bird books.  haha!  His name is Puddleglum and I hope I was not being too much of a Puddleglum when I reminded him repeatedly that his sweet duck is at the bottom of the food chain around here.  Here's to hoping he survives. 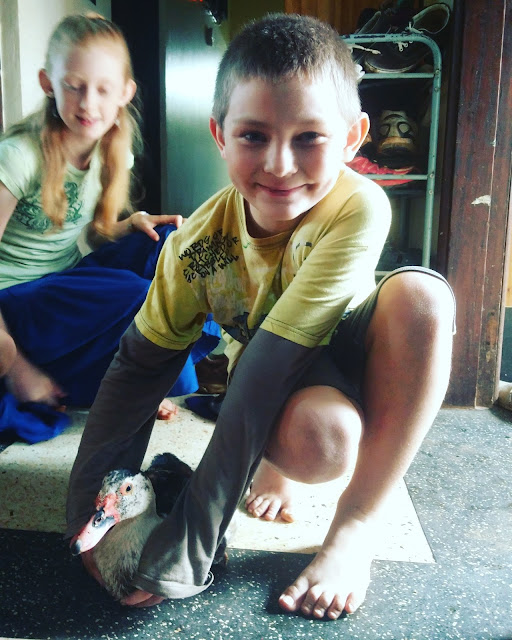 :: And for all my lamenting that we only have Pied Crows on our compound, we actually have quite a collection now!  The most exciting finds being a Coucal, a Plantain Eater and a Yellow Billed Kite.  We also had to add the Barn Owl that rested on our compound for a day a couple years ago. 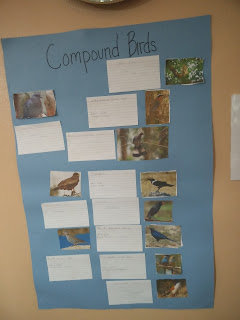