::First of all, I wanted to thank everyone for all your prayers after our break-in.  We still praise the Lord that no one was hurt and that we didn't lose any possessions.  The intruder has been in jail this whole time and will appear in court soon.  Eric will need to go to court also.  Please continue to pray that God's will be done.  It appears that this is not his first time in prison.  In the meantime, Eric has a student that is from the same tribe as the intruder and has gone a couple times to meet with him in jail.  He was able to share the gospel with him and pray with him.  It also appears that he was not alone in his plans to break into our house.  His cohort is not locked up at this time however, as the evidence against him is still technically considered "hear-say" and not enough to imprison someone for.    The kids have recovered quite well from all of the trauma.  The first few days were rough, but God carried us through.  To Him be the glory!  It was such an encouragement to know that so many were praying for us!  The Lord has also sustained me, particularly in regards to my adrenal insufficiency which really doesn't like stress (I took lots of extra steroids!) and I praise him for that.  It does seem, however, that the stress and busyness have thrown me into an RA flare and the past couple days have brought lots of joint pain.  I know it will pass soon though!

:: We were blessed this past week with a major distraction from the heaviness of the break-in, by a visit from Eric's mom.  Her timing couldn't have been more perfect as she was not here for the break-in, but was here right after!  We enjoyed introducing her to our friends, our church, the college, and our lives here.  We're eagerly anticipating her and Dad coming back one day soon! 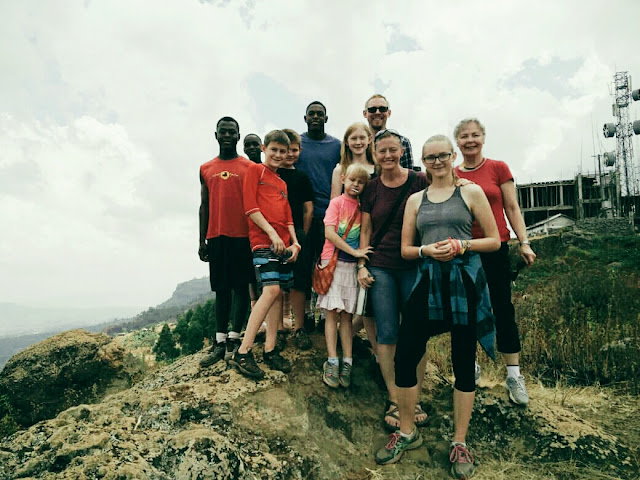 Visiting Eric's students at the college: (who's that cute little student right up front?! ;-) ) 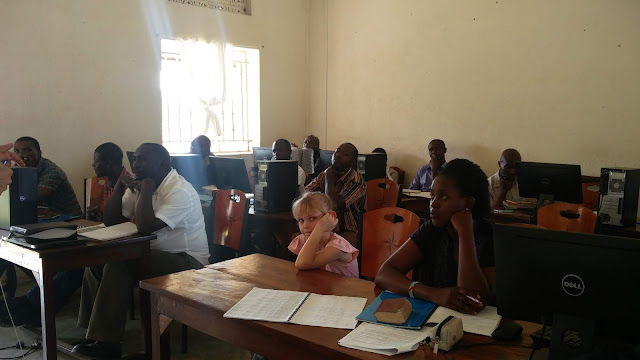 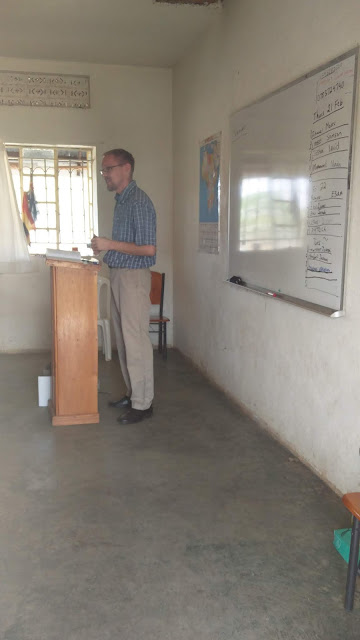 We also were able to visit some friends in the church.  Mama Evangeline is the oldest member of our church (past 90 years).  She broke her leg a couple months ago and has not been able to recover her mobility.  She's a precious dear sister in the Lord. 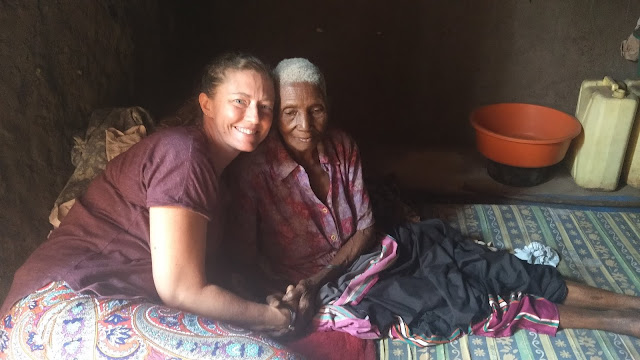 Last night God carried us through some scary moments as we had someone break into our house.  It was about 11pm.  Everyone except Eric was sleeping.  If you look at this picture that I took today, Eric was sitting by the window where Jimmy is pictured reading a book.  If you look in front of the doors, you will see a hole in the ceiling.  That hole is the access point to our attic.  The perpetrator climbed onto our roof (we aren't sure if he did this during the day or just before the incident), broke through the clay tiles on the roof, into our attic and started to come through the hole.  Eric saw the door slowly close and thinking a child was perhaps hiding behind the door needing something, he watched, but then through the screen on top of the door he saw two feet start to come down. 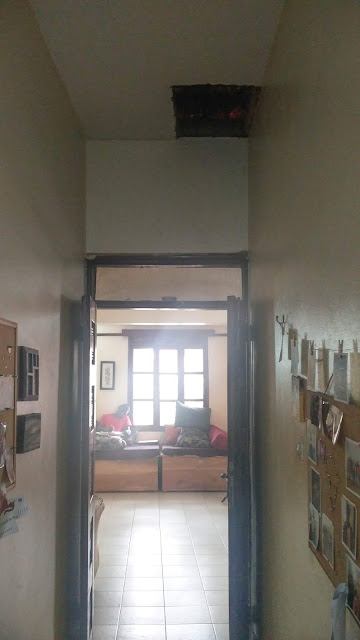 He immediately yelled and our security guard came to help.  The perpetrator went back into the attic.  In the process, I woke up and the Magalas (whom we share our compound with) also woke up.  Pastor Charles sounded an air horn to alert neighbors and we called in more security. (our security company responds more quickly than the police in situations like this)  In all the noise, our big kids woke up, but we also realized that we didn't know where the guy was, if he was alone or if he was armed.  So we also woke up the little kids and ushered them out to the van and locked them in the van, which was parked right by our water tower, which is close to the roof.  About 10 minutes passed of the men trying to look for him.  Suddenly, as Timothy (age 18) was starting to climb on top of the roof, the perpetrator came up onto the roof and Timothy chased him.  The kids in the car saw Timothy running after him and then he jumped from the roof to the water tower and down.  He started to run.  We all yelled.  Then Matthew (our 15 years old) rushed him from behind, grabbed him around the waist and threw him to the ground.  (His courage and strength amazed us all and I'm so proud of the man is becoming!  If it wasn't for his courage and quick thinking we probably would have lost the guy. When we asked him about it later, he said, "I just did what I have always seen them do in the movies." hahaha!)  Our security guard was about 20 feet away.  He came and jumped on him.  Then Eric was the next to the scene and jumped as well.  The three of them, after a short struggle, subdued him.

We still didn't know at that point if he was the only one.  So while we were waiting for the police, we began to search the compound and stay on alert.  Then the police came and took him away.

The kids were understandably upset and afraid to go back in the house and try to sleep, so I took them to the hotel while Eric and Timothy stayed in the house to make sure everything stayed calm.

The police hypothesized that his goal was to get into our house and unlock the doors for his friends to come in.  These guys almost never move alone, but we're quite certain his friends didn't actually make it into the house.  Once the alarm had been sounded they probably took off.  These bad guys need to realize that between us and the Magalas and all our children, we have a small army on this compound!  haha!

Please continue to pray for our safety, that none of these guys or their friends try to get revenge on us, and for the hearts of our kids that they will be full of peace.  While it was super important to get them out of the house and away from possible danger, it meant that they didn't blissfully sleep through the trauma (the little ones surely would have!) and instead they were alert to the fear and unknown of the situation for quite a while before the guy was arrested. 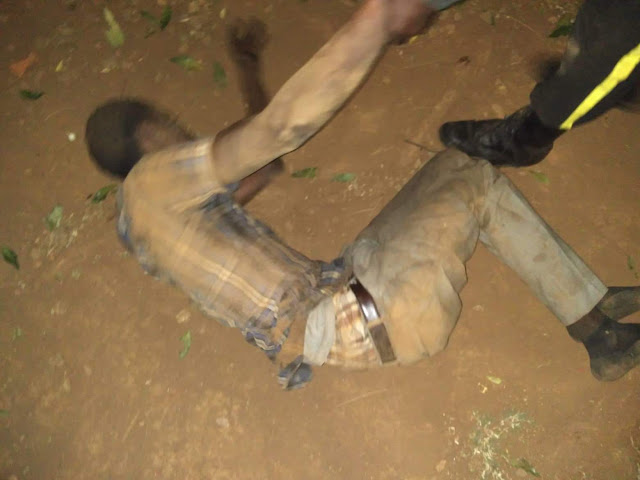 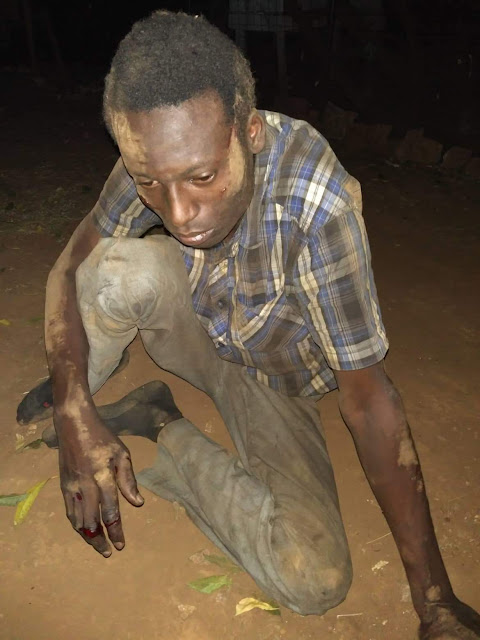 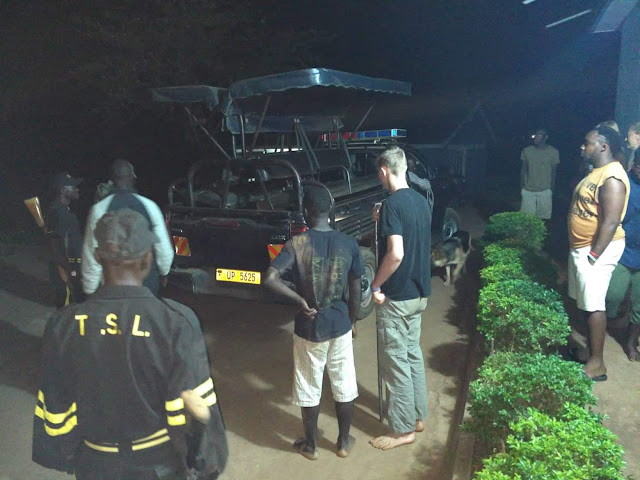 Rehashing the nights events, encouraging small hearts, and answering many questions over a yummy breakfast at our local hotel.  Turning their eyes once again to the goodness of God to keep us safe, framing a practical theology of God's love, power, and sovereignty and our ever-guarding warrior angels that God sends to take care of us. 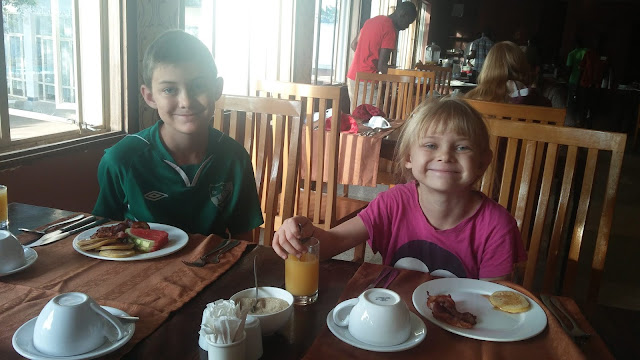 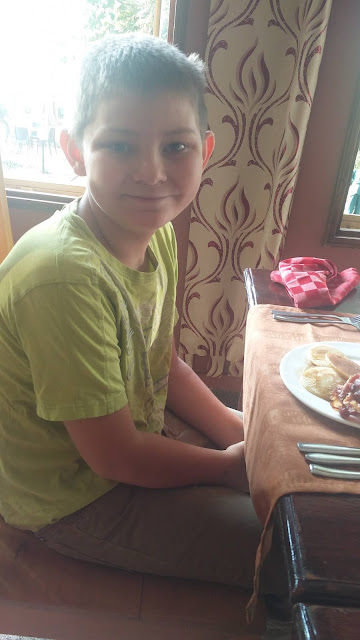 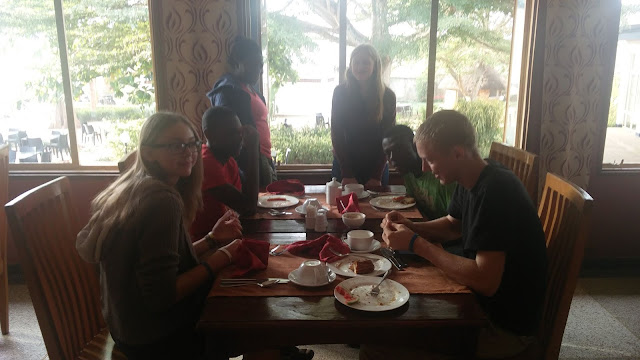